One of the most influential and unsung pioneers of the modern day cultured pearl industry was an Englishman called William Saville-Kent.

Many popularly associate Kokichi Mikimoto with the discovery of the technique to culture a spherical pearl in the early 20th century. But the intriguing truth of the race to discover how to mimic nature's process of creating a spherical pearl is far less clear, even today.

By the late 1890s, the pearling industry in Queensland, Australia was in real trouble. Although the sixth largest industry in Queensland in 1884, its export value had almost halved within the next 5 years. The coral and oyster beds off the northern coasts of Australia and the Torres Strait between Australia and New Guinea were sadly being depleted by divers and fishing fleets in search of valuable natural pearls and mother-of-pearl shell for use as buttons. 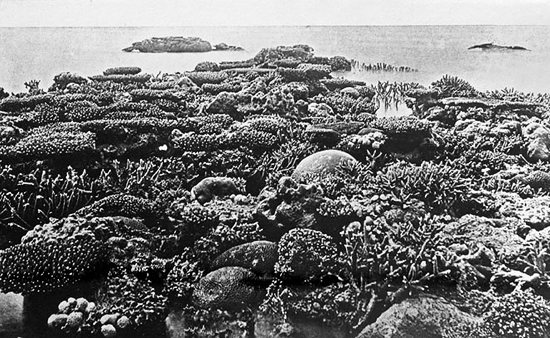 William Saville-Kent was a marine biologist with considerable experience of surveying and managing fish and oyster stocks. Over a period of 15 years, he was appointed by the British Colonial Government as Inspector of Fisheries in Tasmania (1884-87) and Commissioner of Fisheries for both Queensland (1889-92) and Western Australia (1892-95).

One of his main roles was to report on the increasingly difficult economic and environmental situation facing the pearling industry, introducing systems for licensing fishers, regulations for protecting the smaller sizes of the catch and creating protected government reserves for the longer-term sustainability of this natural resource.

Beginning his experiments in 1889 at Thursday Island in the Torres Strait, the centre of the Queensland pearling industry, Saville-Kent would have been very aware of the impact that his work could have on the industry that he was so fascinated with. In this extract above from his 1893 book The Great Barrier Reef, he describes a single perfect spherical pearl (number 3) with a market value then of £400, worth approximately £40,000 adjusted for inflation today.

By 1891, Saville-Kent had successfully produced a number of cultured blister pearls and exhibited these in London. This was two years before Mikimoto had cultured five semi-spherical pearls in Japan.

Returning from London in 1905, with a syndicate called 'The Natural Pearl Shell Cultivation Company of London', a commercial cultured pearl farm was established near Torres Straits. Saville-Kent and his financial backers were convinced that they had the secret of how to produce a spherical cultured pearl.

There were by now others, however, with the same objective and this unique commercial and scientific race had begun...

From The Naturalist in Australia (1897) [Public domain], via Wikimedia Commons