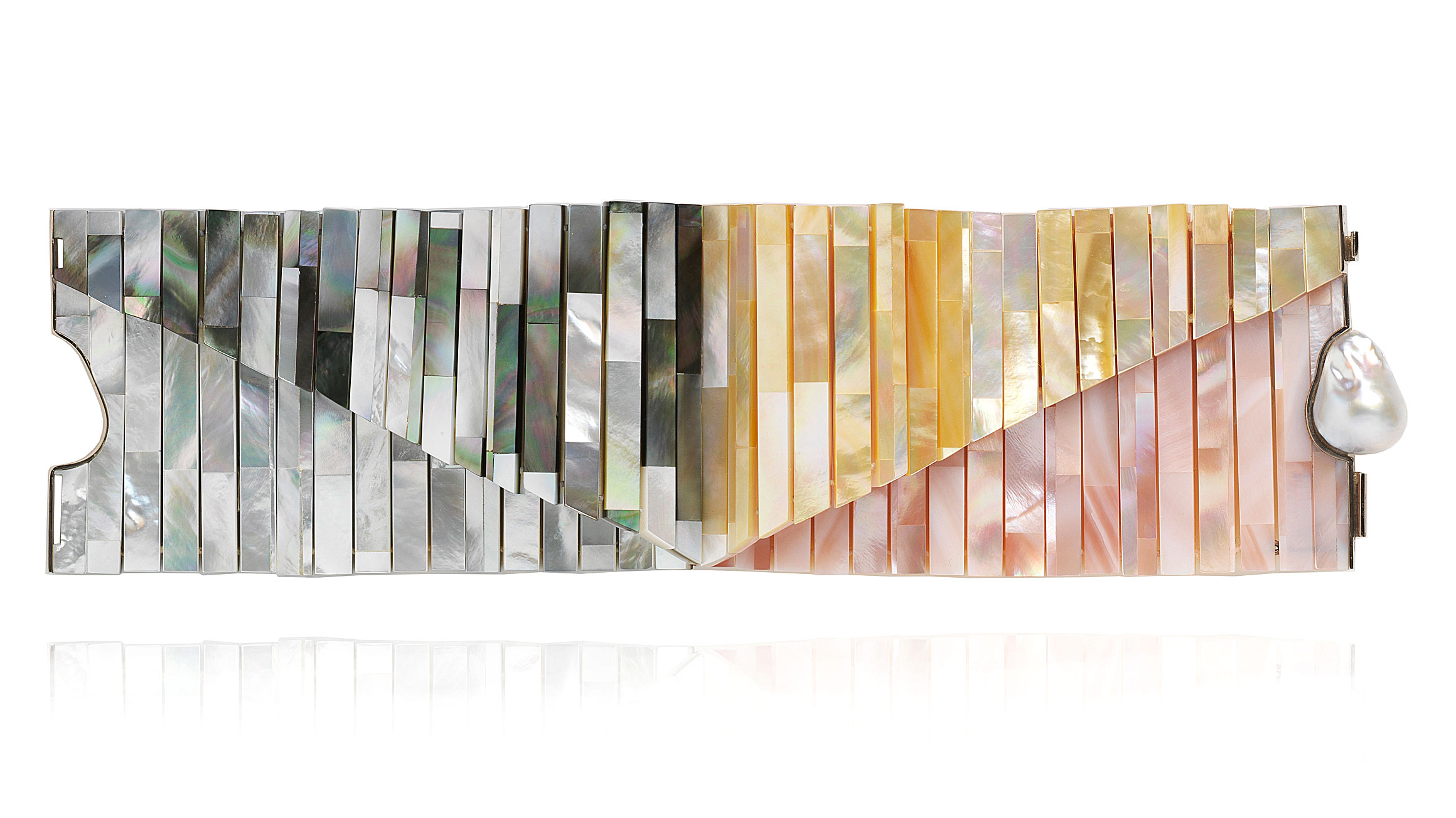 Melanie Georgacopoulos is renowned for her work reinventing the pearl for a younger 21st century audience. Today’s renewed fascination with the gemstone owes much to this young designer, a graduate from London’s famous Royal College of Art. The Winterson Journal talks to Melanie about her new avenue of exploration with the pearl.

Without inhibition, Melanie Georgacopoulos has sliced, drilled, quartered, caged and wrapped pearls in illusions of knots in her mission to bring this extraordinary gemstone to a new generation of jewellery buyers.

Her most recent collection, MOP Shell, directs her inventive energies to Mother of Pearl. Otherwise known as the material nacre, it is produced by mollusks as an inner shell layer as well as forming the outer coating of the pearls themselves.

What drew you to mother of pearl?

Natural Mother of Pearl has been used by many cultures all over the world, to create both expensive and inexpensive items. It is a strong, resilient and iridescent material that has been used for thousands of years, mainly in the form of inlay, which you see a lot in East Asian and Islamic religious art. 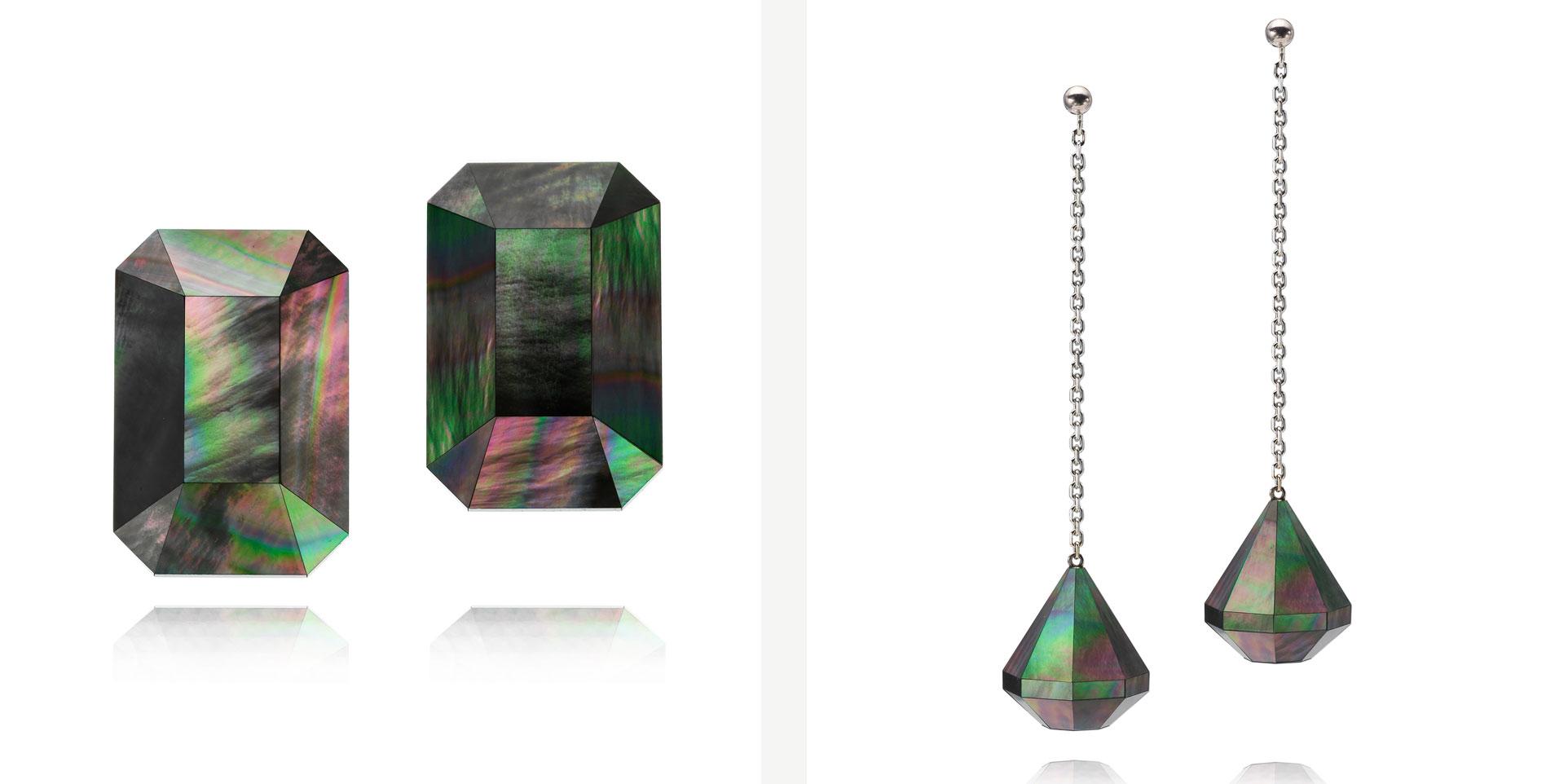 At the same time, it was a popular material for more common Victorian household items such as knife handles and buttons, as well as Chinese gaming counters and delicate caviar spoons. I think it’s this heritage as a material that can move from high to low that originally sparked my interest.

You often look for the subversive angle in your design; what was the twist with mother of pearl?

As a material it is more widely used than pearls, but despite its popularity, it has never reached the pearl’s symbolic status. I felt that mother of pearl was ready for a reassessment, in the same way as the pearl felt for me back in 2007 when I first started to play with them in the studio at the RCA.

Pearls were so associated with the twin-set on one hand, and the ostentatious fakes of Coco Chanel on the other, that the gemstone felt like a really rich place to mine deeply for inspiration. Mother of pearl is in the same place really. One rarely sees it used in fine jewellery today and I wanted to explore whether it was possible to challenge those perceptions.

Your pearl collections tend to focus on the monochrome beauty of the gem, where MOP Shell really plays with the fabulous colours of the material. How did it feel to play more with colour?

The collection really aims to celebrate mother of pearl’s qualities as a material, and showcase its various beautiful, rich colors. It comes in soft pink, crème, white, peacock and golden yellow with many variations. 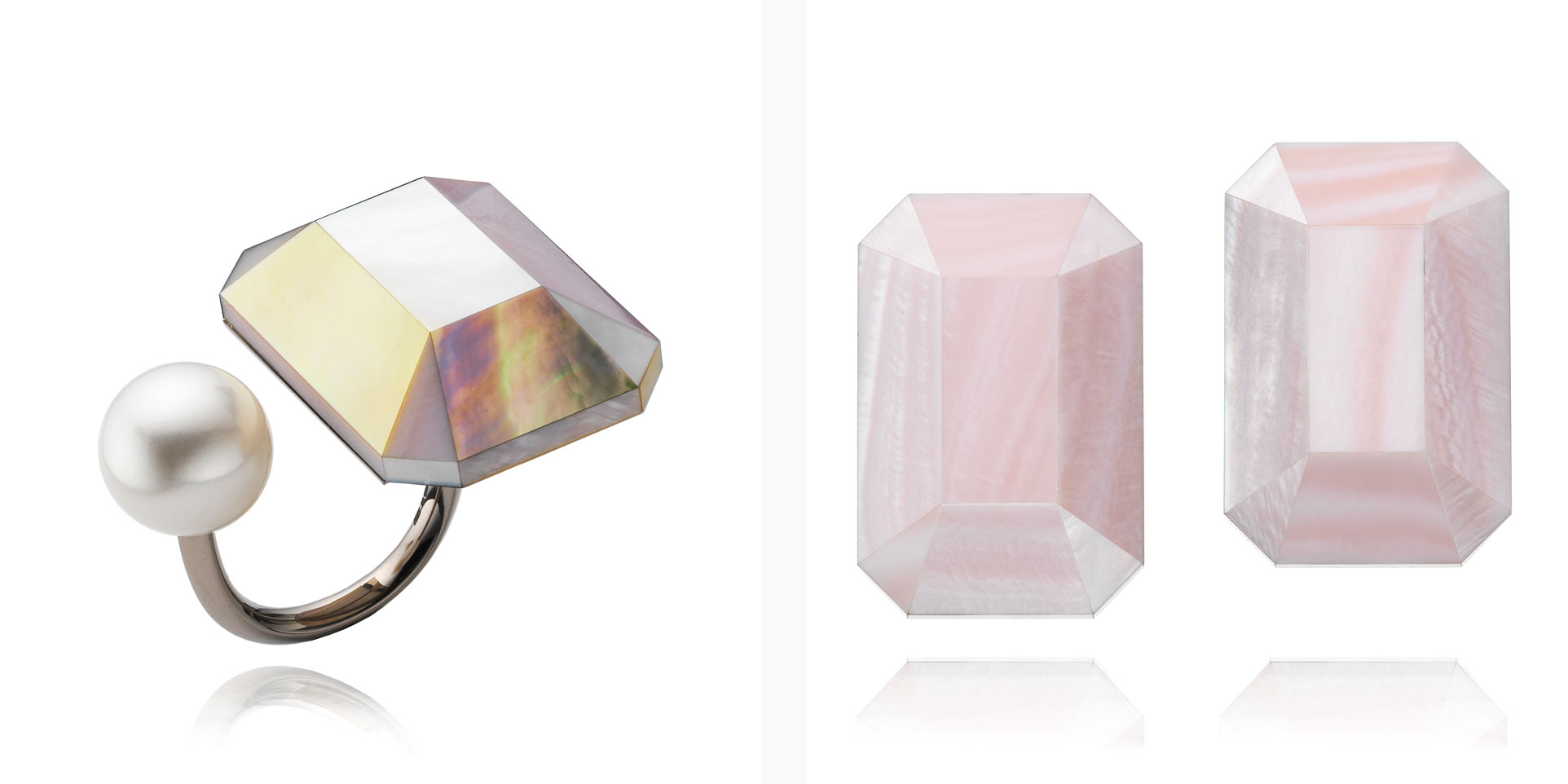 It was actually really refreshing to work with a flat material that has such striking colours and work out how to combine them. I’ve enjoyed this so much in fact, that my next collection focuses even more on these diverse colour combinations and how they change depending on the light.

You enjoy exploring the meaning of value in jewellery by playing with the forms of other classic precious gemstones – diamonds and emeralds – and that theme re-emerges here. Can you tell us a bit more about that?

When mother of pearl is used in jewellery, it's mainly seen flat and as an inlaid form. By taking this flat material and creating seamless three dimensional diamond and emerald shapes, I felt I could really push further my exploration into the relationship between gemstones and pearls in contemporary jewellery.

The pearl has moved on and off lists of precious stones over the centuries – from being the height of luxury and value in the time of Cleopatra to being close to worthless in the late 20th century due to overfarming. I think I have always been interested in playing with perceptions of value, asking questions in particular about the value of design and how people perceive that. 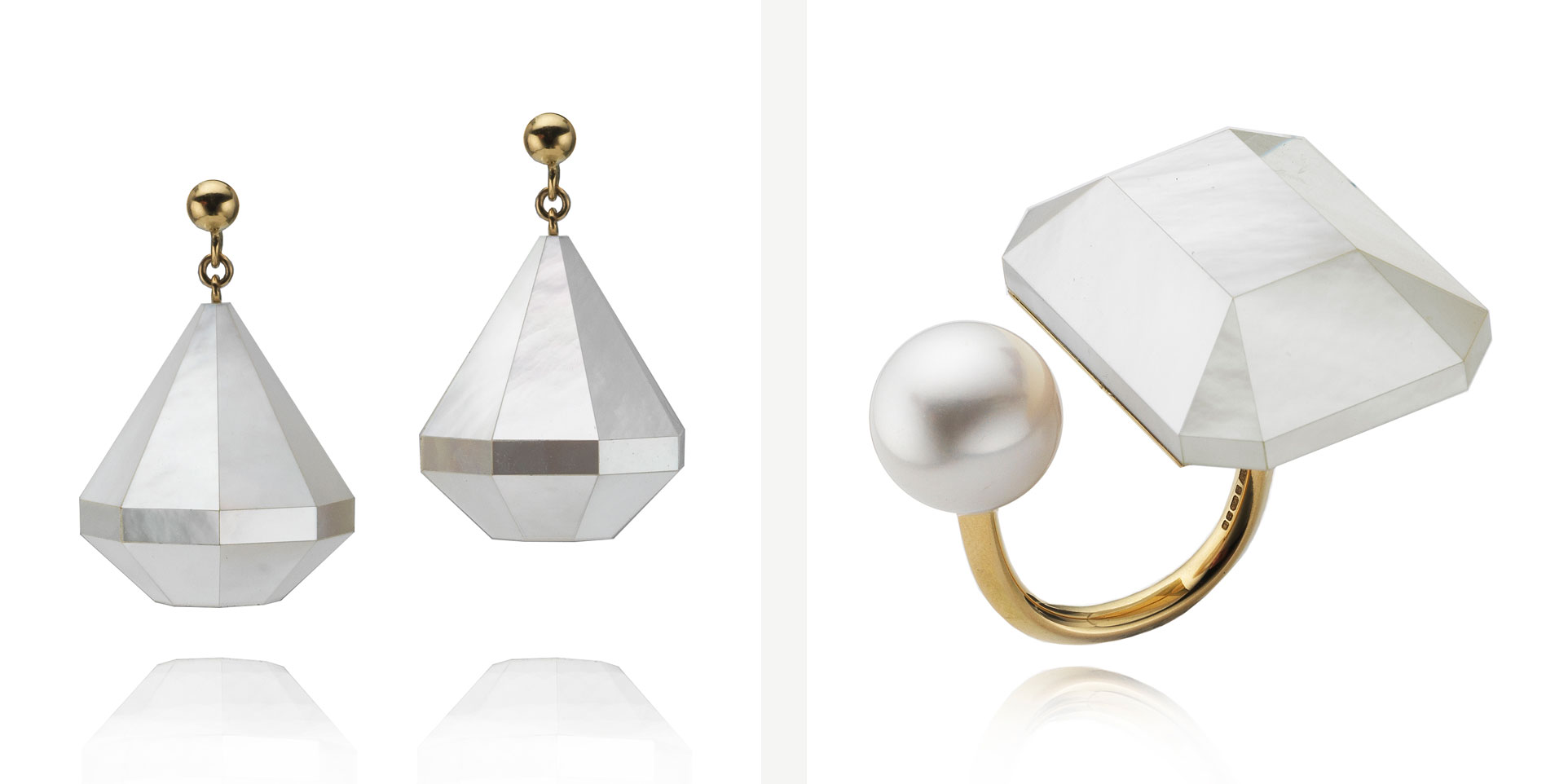 These pieces are strikingly simple, made of relatively poorly perceived materials, and yet the high craftsmanship and labour intensive production that each piece requires elevates the material far beyond any financial worth one might place on the components.

What drew you to jewellery originally and what’s the Melanie Georgacopoulos design philosophy?

I first studied sculpture and my love of jewellery comes from the fact that it relates to the body. I’m also fascinated by the connection that people have to the jewellery they pass on one generation to another.

One of the reasons I think I may have been subliminally drawn to pearls is that my grandmother wore a pearl necklace every day, and that idea of creating something that is worthy of becoming so intimately connected with a person’s identity really interests me. Good design, for me, is innovation, longevity, and has to represent its time. I strive for this with every piece.

With thanks to Melanie Georgacopoulos 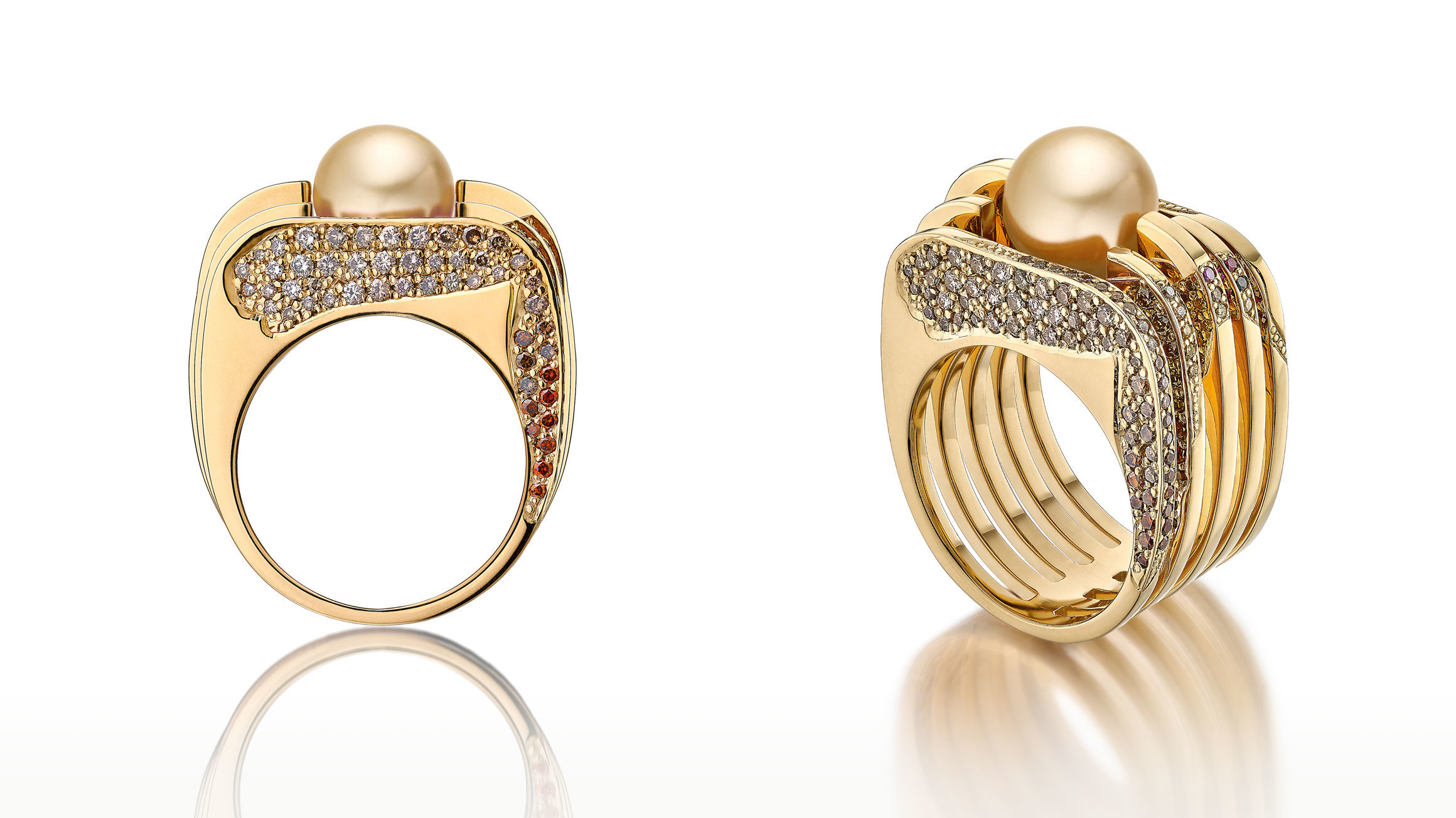 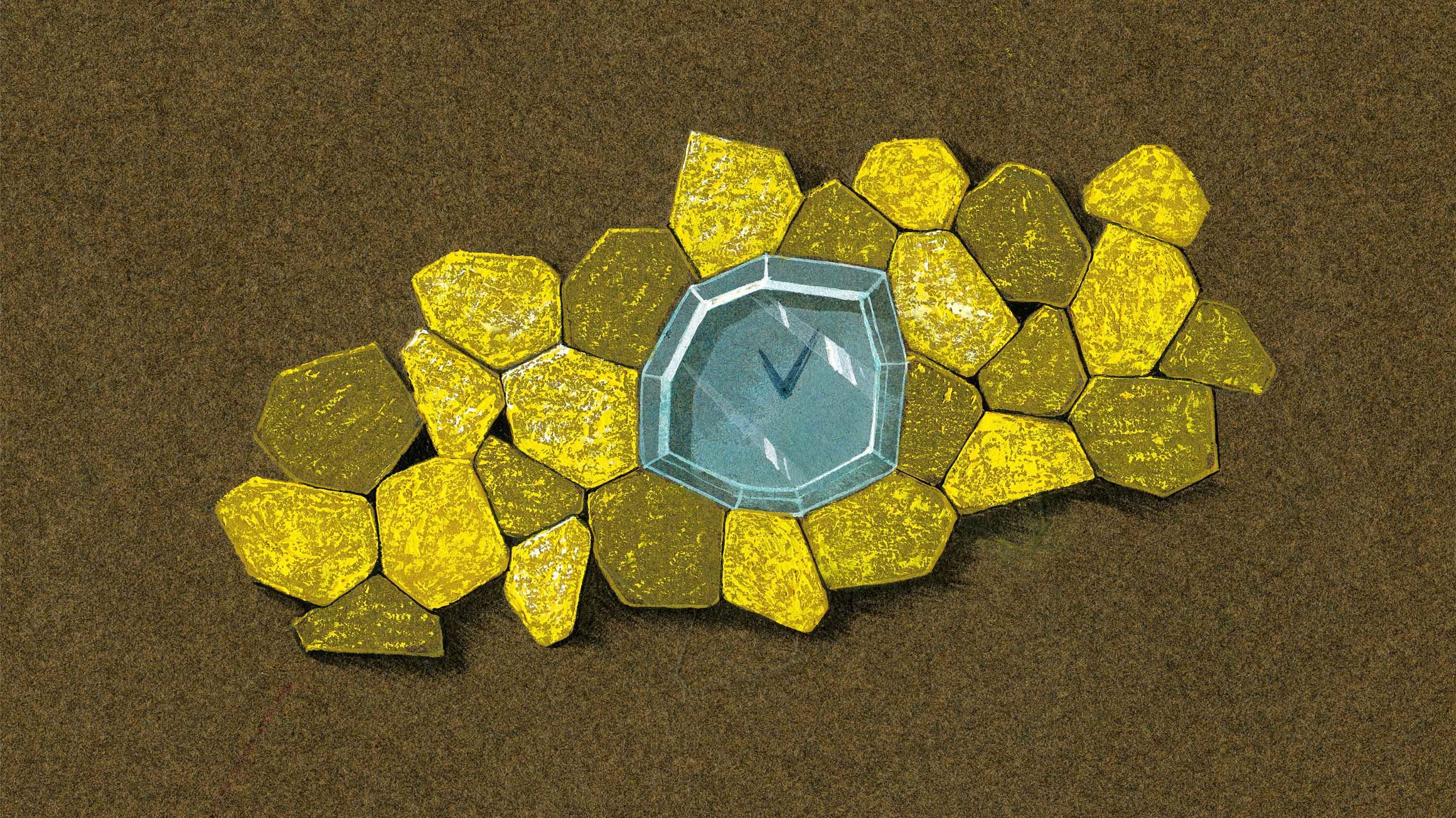